Jean Kanokogi, PhD, Director of Mental Health & Peer Support, Federal Law Enforcement Officers Association (FLEOA) came back to help us better understand how the principles of Emotional Intelligence actually play out in the workplace. This interview has been edited for length and clarity. (If you’d like to brush up on the basics of EI, check out our first interview with Dr. Kanokogi and our short video.) 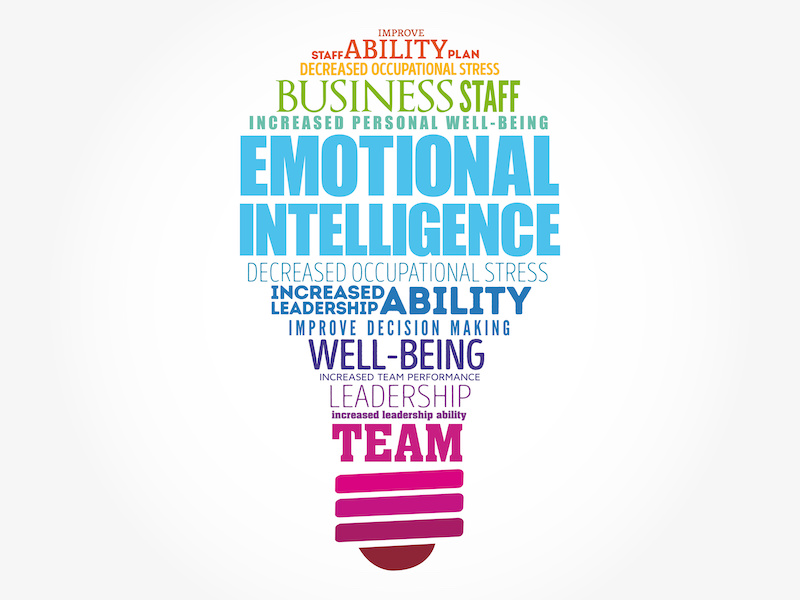 Robyn: Hi Jean, thanks for coming back to discuss the practical application of EI in the workplace. Can you please give us an example of EI being applied by a manager in a work situation?

Jean: Emotional intelligence (EI) affects your overall mental well-being, your work, and personal life. Emotions have a tremendous impact on virtually everything you do.

Navigating areas at work, including that terrible boss, obnoxious co-worker, or disrespectful subordinates is key to maintaining your emotional well-being and perhaps you can use some emotional intelligence skills to help them become more emotionally intelligent.

Let Fred demonstrate his EI skills: Fred had a rough morning. His dog had an accident overnight, he and his wife had an argument about finances before he left for work, and then he got cutoff in traffic and hit a pothole, spilling coffee on his shirt and leaving him worried the car was damaged.

Fred arrived at work feeling angry, worried, and anxious, but took a moment to reflect before getting out of his car. When he really thought about it all, Fred realized it all started with him being angry at himself about the dog’s accident, which he really couldn’t have known would happen since their routine had been the same as usual. Once Fred identified the source of his bad mood, he was able to see how it amped up his reactions to the other events of his morning. He checked his car to reassure himself nothing was damaged, then called his wife to apologize for snapping at her, before heading inside to his office.

Fred smiled at his staff and said good morning, exchanging greetings with his colleagues. He shared a bit about his calamitous morning, laughing at himself. He added to please forgive him if he was distracted that morning. Fred realized he needed to sort out his feelings about the morning, so they didn’t spill over into the rest of his day.

Robyn: So, that’s an example of using EI skills. Why was it important/useful for Fred to apply those principles? What might have happened if he hadn’t?

Jean: Since Fred was very skilled at using his emotional intelligence, he knew what his feelings about each situation were and by identifying those emotions, he contained them and kept them proportional. He really managed and identified his feelings instead of letting them mount into one ball of rage and verbally assaulting anyone in his path. By doing this, he was better equipped to deal with small frustrations around the office and at home.

If Fred did not employ his emotional intelligence skills, he would not have been the only unhappy person because of his morning – his dog would have been upset, along with his wife. Fred might have been responsible for a life-or-death road rage incident. And if he hadn’t paused to manage his emotions before entering his office, his staff might have thought Fred’s bad mood was a result of something they’d done.

This scenario is a great example of how Fred employed all components of emotional intelligence by incorporating his skills related to the intra-personal, inter-personal, adaptability, stress management, and general good mood. Typically, when something goes wrong, you start off with an emotion, so identifying that emotion can help you take control of your feelings.

Robyn: We often think of these skills as top-down skills, something managers and supervisors need to use. But EI is important for everyone. Can you give us an example of a non-supervisory employee using EI in the workplace?

Jean: Mike noticed that his co-worker, Pete, looked very sad. Mike asked Pete if he was ok. Pete said yes, he just felt off and had a knot in the pit of his stomach but didn’t know why. Pete confided in Mike that each time their co-worker, Jeff, is around him, he just feels awful. After further discussion, Pete remembered that Jeff made a judgmental public criticism about his work once and it made him feel frustrated and upset. Since then, each time he is around Jeff, that comment still subconsciously bothers him. After Pete articulated his emotion, Mike noticed Pete visibly looked a bit better and Pete realized that recognizing how he was feeling and saying it out loud made him better able to let go of it.

Getting along with others in general is a key component for happiness. We spend a significant amount of time having to interact with others in the workplace. As soon as I start talking about getting along with others in the workplace, most people’s minds start to wander towards that one person who stands out and is the most annoying to them. I can almost imagine the reader right now nodding their head. Let’s focus on that one person you’re thinking about. What do they do that gets under your skin? I would guess they fail to listen, lack empathy, are energy vampires, or are perceived as less than stellar in job performance which requires you to have make up for their short comings. It’s good to be prepared to deal with these situations.

When an event activates your emotions, you could feel queasy, upset, frustrated, or maybe even angry. Now that you’re armed with EI tools, you can start by getting control of your feelings. Determine if these emotions are big or small and think about how you can manage them. Think about your own emotions in each situation. Please know that you are allowed to feel, and the key to emotional intelligence is knowing what you are feeling and how best to deal with it in the moment. If you know you are angry or upset, that is the first step in determining what is upsetting you and whether or not feeling that emotion can help in any way. Once you explore your own emotions, you can delve further into what someone else is feeling.

Robyn: It sounds like EI can really made a difference in many situations. How might that situation have played out if Pete hadn’t used his EI skills?

Jean: If Pete did not further explore his own emotions, he could have let that negative feeling fester and ended up with a very poor working relationship with Jeff, and/or lashing out at others when being around Jeff activated those emotions. He realized he could use his own emotional intelligence skills to first address his feelings, then adapt to the behavior of another so it would not have a negative impact on him in the future. By exploring and identifying what he was feeling, Pete really took control of his emotions which enabled him to keep moving forward at work.

Robyn: It’s clear EI skills can change our interactions in the workplace for the better. How could a manager/supervisor encourage employees working under them to develop and use these skills?

A key component for leaders to embrace is that emotional intelligence is important so you can perceive, reason with, understand, and manage emotions – whether your own or others’. Being able to handle emotions gives you the ability to guide and help people, and it can help you be happier and more successful. Empathy and kindness can be contagious.

Taking these extra steps will encourage your staff to utilize and want to use their emotional intelligence skills.

Robyn: We’re just about out of time. Is there anything important we haven’t touched on yet, or one most critical point about EI in the workplace we should remember?

Robyn: Thank you so much for taking time with us again, Dr. Kanokogi! I’m so glad we’re deepening our understanding of Emotional Intelligence and learning how to use EI skills at work.

How to Talk to a Loved One about Memory Issues Video

Join us for the 2022 Feds In Motion Challenge!
Scroll to top