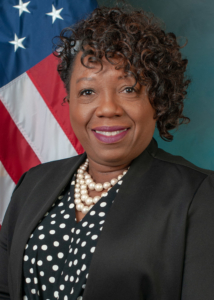 Shirley Jones began serving as the 15th National President of the national organization of Blacks In Government (BIG) on January 1, 2021.  Ms. Jones has previously served in a variety of leadership positions within the organization, including National Executive Vice President, Region XI Council President, and National Legal Review Committee Chair, amongst several other positions.  Believing strongly in BIG’s mission of advocating for equal employment opportunity and a level playing field, Ms. Jones considers herself both an employee advocate and a career development trainer.

In her advocacy role, Ms. Jones has twice had the opportunity to testify before Congress on the lack of diversity in the government’s Senior Executive Service (SES) and the impact of pay for performance on employee morale.  And, while serving as BIG’s National Legal Review Committee Chair, she worked with rebuilding BIG’s Equal Employment Opportunity (EEO) Institute.   As a career development trainer, Ms. Jones has presented around the country at the BIG National Training Institute (NTI) and Regional Training Conferences (RTC) teaching courses on effective communication skills, political activities of government employees, and developments in EEO law.  Ms. Jones frequently speaks in the DC area, addressing a variety of topics related to leadership and empowerment.  She has also written Op-Ed pieces for the historic AFRO newspaper, HBCU Connect, and other publications.  She is currently a Featured Contributor for GovLoop.

Ms. Jones has committed her career as an attorney to public service.  She is a Senior Executive Service (SES) Member at the U. S. Government Accountability Office (GAO).  And, as the first African American female in the agency’s history to be appointed to the position of Managing Associate General Counsel, within GAO’s Office of General Counsel (OGC) she has management and leadership responsibility for three of the office’s legal teams focused on budget and appropriations law and congressional oversight.  Ms. Jones is also a certified leadership and diversity and inclusion trainer on GAO’s adjunct faculty.  For over 20 years she also taught accounting and tax law classes part time at the law school and undergraduate level.  Ms. Jones graduated magna cum laude from Spelman College with a Political Science degree.  She received her law (J.D.) and Masters of Laws (LLM) in Taxation degrees from Georgetown University.