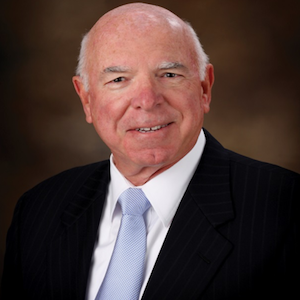 Ken Thomas is the National President of the National Active and Retired Federal Employees Association (NARFE). In this role, he is responsible for providing general oversight of and strategic direction to the association.

Thomas began his federal career in 1968 at the Rehabilitation Services Administration. For the next 35 years, he would serve in management and executive capacities that spanned areas of program management, training, compliance and management information systems (MIS). Among his notable projects, Thomas developed an application used by state governments to manage, track and report client services to the Department of Education and Social Security Administration, coordinated the District of Columbia’s city-wide compliance with the Rehabilitation Act of 1973 and implemented government service programs for physically, mentally and emotionally challenged individuals in federal and state prisons.

A NARFE member since 2004, Thomas volunteered in numerous national and state events within the organization. As host chairperson for FEDcon18: NARFE’s premier training conference, the 2017 NARFE Federation Presidents and National Executive Board (NEB) meeting, 2014 NARFE National Convention, 2013 NARFE Federation Presidents and NEB meeting and the 2012 and 2013 Florida Federation Conventions, he coordinated local logistics, events and publicity in support of annual meetings.

Thomas earned his bachelor’s degree in philosophy from St. Bernard Abbey in 1966. He attended American University from 1967-1969 in pursuit of a graduate degree in counseling psychology. An avid gardener, he received certification as a Master Gardener from the University of Florida’s Institute of Food and Agricultural Sciences and authors The Green Thumb, a monthly newsletter distributed to 50,000 people in Hernando County, Fla. A member of the American Psychological Association, Thomas is married to his wife Arlette, and they have four children.

What are Qualified Charitable Distributions anyway?